So I was lucky enough to be asked to come along to a second Picademy event, not something many people get to do unless they are facilitating the event…

It started a while back when James Robinson from Raspberry Pi put a production company working for Google in touch with me. They were keen to get some interviews and video footage to demonstrate the impact that their support for the Raspberry Pi Picademy training programme had generated. James suggested they speak to me and I was more than happy to oblige. So after many email exchanges and phone calls between myself and the production company a plan was formed to get the video footage Google wanted to tell the story!

As the focus of the story was about what attending the Picademy course has enabled me to do inside and outside of the classroom, they decided it would be great if they could get footage of me at a Picademy training course… So the plan to send me back to Picademy was hatched! The production company discussed the idea with James and the Raspberry Pi Foundation and the decision was made to send me along to day 2 of the Picademy course in Cardiff on the 22nd February.

I was also asked by James if I would present a short 15 minute talk at the start of Day 2 to the attendees detailing what I had done after the Picademy course I attended a year ago in Manchester. You can see the slides for my presentation below.

The presentation seemed well received and I hope that it was of some use to those attending the training.

As well as having to stand up and nervously deliver my presentation, I also got to take part in a Picademy Day 2 project! I teamed up with two others on the course and worked on a Picamera project which would use facial recognition and tweet a picture out if a face was detected in it. In all honesty the majority of the project was done by Jay and Ben as I kept being called off to film little cutaways or to pretend to be typing something on my laptop!

We added the code for the project to my GitHub account along with documentation and wiring diagrams etc. You can find it here: https://github.com/jonwitts/PiCademyProject2017 feel free to fork it, break it, make it better etc. 😀

It made use of the Clarifai API to perform the facial recognition. You will need to sign up for a free account over on their site: https://developer.clarifai.com/signup/ and then grab your API keys and add them to the Python code. You will also need to create a Twitter App to allow your Python code to send tweets using the Twython library. You can do that over here: https://apps.twitter.com, and again added the four API keys from that into the auth.py file in the code.

The core part of the programme comes from a piece of code that Marc Scott from the Raspberry Pi Foundation shared with us. You can find that here: https://gist.github.com/MarcScott/2116aae340afef8bdccdd035d4e20c8b

I then created a quick wiring diagram to show how we had connected our button and LEDs for the project using the awesome Fritzing software package. 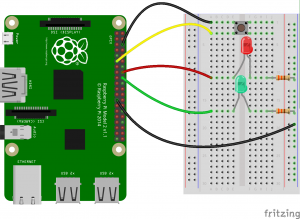 As we discussed at Picademy, there are a few Safeguarding issues if you wanted to use Clarifai in the classroom, as it is an online service which uploads a copy of your picture to them and is processed on their servers. It seems as though their T&Cs then state that they have copyright control over the image… That aside it is a great service which I think deserves looking into in more depth.