I have been teaching our Year I (NC year 7) girls Computer Science since September now and I am approaching the end of the course, when it will rotate to the other half of the year group. I thought it best to carry out some assessment of their learning of the previous unit before we start the final unit on Web Design.

As all of my resources and grades for the course are set up within Moodle I thought what better to use for the assessment than a Moodle Quiz.

The previous unit was “What are Computers?” based upon the fantastic resources from Nicki Cooper which you can find over on her site here. The unit had run for five weeks and had mainly been theoretical work looking at what makes up a computer. The classroom based lessons had not learnt themselves well towards assessment other than noticing how the students were progressing with the tasks in class; so an end of unit quiz was called for!

Moodle has a fantastic quiz engine (one of the best in my opinion!), with loads of built-in question types ready for you to use to create your quizzes. However for this unit there was a particular topic I really wanted to test the students on which I could not find a good fit for in the standard Moodle question types. I had introduced the students to a model of what a computer is (see the image below), and really wanted to know if this model had stuck with them. The best way I could see to test that in a quiz was to have a question where they had to label the parts of the model correctly, and thought that if they could drag-and-drop the labels; even better. Unfortunately none of the default Moodle question types fit this bill… 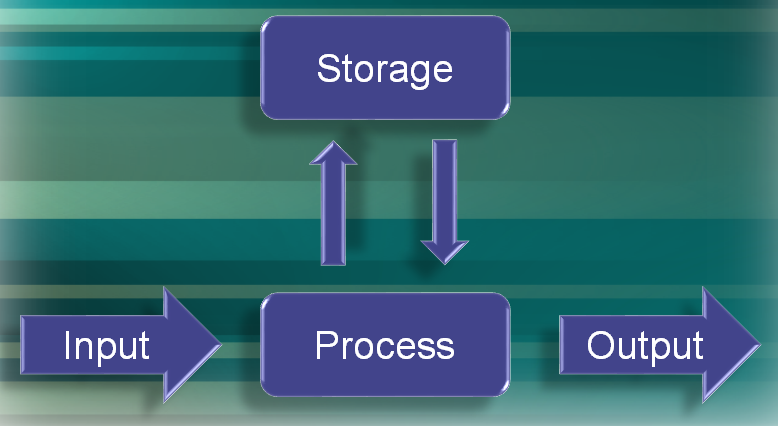 So I took myself off to the Moodle Plug-in Directory and had a search around. Turns out that there are loads of third-party question types available for you to add in to your Moodle install! I am quite cautious with third-party add-ons with Moodle though (having been caught out once before many years ago) and try to keep Moodle as close to “stock” as possible. If you install third-party add-ons which stop getting developed you can find yourself in a really quandary at upgrade time. Do you upgrade and lose any work that had been done with the add-on or do you keep your Moodle on the old version and miss out on the new features?

So after convincing myself that the Open University were likely to continue to develop these plug-ins and I would not be stuck when upgrading, I went ahead and installed the following question types:

With those three question types installed I began to make my question! Here is a short video I made which demos the question and shows you the basic steps for setting one up yourself.

Hopefully I will see a lot more of these question types being created by my colleagues as I can certainly see applications across many different subject areas, and as the videos hopefully show they are not too hard to create either!